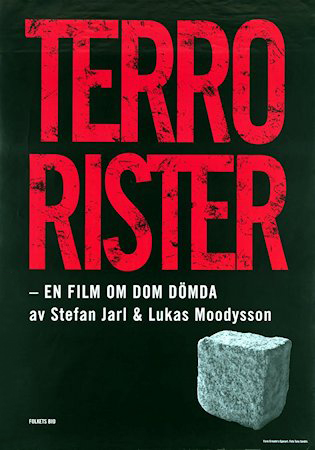 Children of the revolution /Gunnar Rehlin

Children of the revolution

Take Stefan Jarl, Sweden’s most internationally acclaimed documentary filmmaker. Add Lukas Moodysson, star of the new generation of Swedish feature film directors. The result is Terrorists. A controversial film about the way justice was done after the violent Gothenburg riots during the EU summit in the summer of 2001.

”We made a decision not to be objective. But what is our tunnel vision compared to the bias shown in mass media?”, Lukas Moodysson says.

The Gothenburg riots took place in June 2001 against the backdrop of the EU summit attended by European leaders and VS president, George W Bush. The authorities were nervous since previous summits had sparked demonstrations, so police officers armed with riot gear were drafted in from around Sweden. As many had feared, the ensuing confrontation was violent, culminating in the use of live ammunition by police who shot and wounded three protesters, one of them almost fatally. The streets of Gothenburg became a battlefield where shop windows were smashed and fires raged.

These events fuelled a fierce debate in the Swedish media which goes on unabated to this day. The police have been widely criticised for a series of blunders which many believe were the real cause of the violence. This autumn one high ranking police official is due to face charges relating to the incidents. Some 60 or so of the demonstrators were sentenced, many to what appeared to be unduly long prison sentences, given the circumstances. The majority of these have subsequently been shortened or even quashed on appeal.

Stefan Jarl is the man behind documentaries such as Nature’s Revenge, Life at Any Cost and The Bricklayer. His most celebrated work is the trilogy They Call Us Misfits, A Decent Life and The Social Contract, studies of social exclusion spanning almost thirty years in the lives of the films’ principal characters and their children.

WITH THREE MAJOR box office successes to his credit in the space of just a few years (Show Me Love, Together and Lilya 4Ever), Jarl’s collaborator Lukas Moodysson has quickly established himself as one of the heavyweights of contemporary European cinema.

A Decent Life and Lilya 4-Ever are both films with an almost visceral impact, hard-hitting and compelling. What other common ground do Jarl and Moodysson share?

”I first met Lukas when I presented him with the Bo Widerberg Prize for Show Me Love”, says Stefan Jarl. ”We both campaigned in support of Palestine and wrote a joint article on the Swedish government’s approach to the situation. Then the sentences for the Gothenburg protesters started rolling in. One guy got five years: just compare that to the short sentences meted out to white collar criminals and paedophiles. Lukas and r decided to pool our experience and this was the result.”

In Terrorists, nine of those young people sent to prison get to have their say. It opens with a disturbing collage of images: people killed in war, bodies shot to pieces, environmental devastation and cruel experiments on animals. This is followed by the young people themselves talking about their political opinions, about why they went to Gothenburg, how they feel about what happened there and what happened subsequently. Jarl and Moodysson pose the questions themselves, interspersing the interviews with footage of the actual riots.

”We started filming based on our own feelings and instincts. On the surface it’s a very straightforward film in the talking heads tradition of a work such as Shoah,” says Jarl.

The Swedish media have been highly critical of the film for not putting the other side of the argument. Jarl observes:

”I invited the Swedish Prime Minister Göran Persson, but he wasn’t keen on the idea, which is fine by me, because r didn’t really want anyone from the other side taking part. Anyway, those people have the entire bourgeois media to speak up for them. And who says documentary makers should be objective? It’s impossible. A documentary should be a voice for those people who don’t have a voice.”

In Jarl’s view the film is a necessarily provocative attack on the ”bourgeois journalists and columnists.”

”These people are showing themselves in their true colours, a bunch of crypto-fascists sticking their heads out of the trenches. And they’re firing all their big guns. One newspaper tried to compare us with Leni Riefenstahl. That’s an amazing accusation that just goes to show what they’re like.”

So how was it for the two of them to work together? ”We complement each other,” says Jarl. ’Tm part of the ’68 generation, where as Lukas was hardly born then. I’m proud that we’ve made a film that bridges the generation gap.

We shot the film first and wrote the script later. I like that way of working, where as Lukas was more into having things written down. But what we built up was a mutual trust that made it easy to accommodate our different temperaments.”

Lukas Moodysson recognises his debt to the older generation of filmmakers.

”For me, Swedish film tradition is typified in children’s films and the vitality of the 1970’S – with people like Stefan, Bo Widerberg, and Roy Andersson. This was a way for me to plug into all that creative energy. I really enjoyed that opportunity.”

”But I must admit I had a slight inferiority complex when we started shooting. I realised I was no documentary maker, and there’s absolutely no comparison between Stefan’s experience and my own.”

Because the film has been accused being subjective, biased even, both directors feel they have been misunderstood.

”The film basically shows people fighting against injustice in this world,” says Moodysson. ”It’s critical of the way capitalism goes unchallenged, and of the bias of the mass media in favour of those who hold power.”

Can a film change the world?

’I´m absolutely sure it can,” says Stefan Jarl. ”Lots of things can change the world, so why not a film? I’m convinced that as an art form it has tremendous scope. It’s a completely unique way to express human values.”

”There are so very few films that aim to change the world. But maybe if you mix A Decent Life with Lilya 4-Ever, you get a film like Terrorists.”

Terrorists has already started to receive invitations from the international festival circuit. But Jarl has been that route before.

”I’ve been to festivals all over the world. You give a lot and get very little in return. Quite frankly, I’m tired of it. The role of documentaries has changed – nobody wants to buy them any longer. So if anyone’s going to take Terrorists around the world, it’ll have to be Lukas.”

”What happens after you’ve released a film is such a carry on. I never really like talking about the films I’ve made. We’ll have to see what happens.”

As Moodysson contemplates his next feature film, rumours persist of a further collaboration with Jarl.

”There is another project we’ve talked about,” says Jarl, ”and for my part a feature film would be an attractive proposition. I’m currently working on a screenplay with the writer Åke Edwardsson, and I’d like Lukas to take a look at it. I believe in working together, but in Sweden there are plenty of filmmakers who don’t like the idea. They’re all so resentful and scared of each other.”

Jarl and Moodysson are part of an dying breed of political film makers. The Swedish population should appreciate that they try to uncover the truth when the government and media actively distorts and cover up the events surrounding the EU meeting in Gothenburg. It is absolutely heartbreaking to see how these innocent kids have been abused and drugged by the Swedish police and convicted to prison in political trials for sending text messages and as revenge for others actions. The only unfortunate thing about this movie is that it will not reach the broad masses in Sweden as it will only be shown it theaters and not be released on video or aired on television.

The political film is important as it can bring new perspectives and insight into complex issues and has a role to play as an educator of the masses.”
/fredrik_aaland from Uppsala, Sweden [from imdb.com]