In early May 1986, Jarl and his crew travelled to Lappland to scout 10-locations for Good People, his fiction debut. Following on the heels of the Chernobyl disaster, Jarl temporarily abandoned his fictional film in favor of filming the effects of the radioactive fallout on the Lapp people. The original tide, Uhkkádus, in Lapp means ”encroachment” rather than ”threat” and refers more to the violation of the Lapp atti-tude toward life than to the poisoning of their pastures and water. Threat/Uhkkádus was the last film to show Lapps who lived traditio-nally. The Lapp chronology is now thought of in terms of before and after Chernobyl.

One of the most important documentaries of recent times.”
/Los Angeles Life

Superb. .. magnificent… This austere, exquisitely photographed film packs a real aesthetic wallop just because every frame is charged with a sense of loss and haunting pictorial beauty.”
/Los Angeles Times 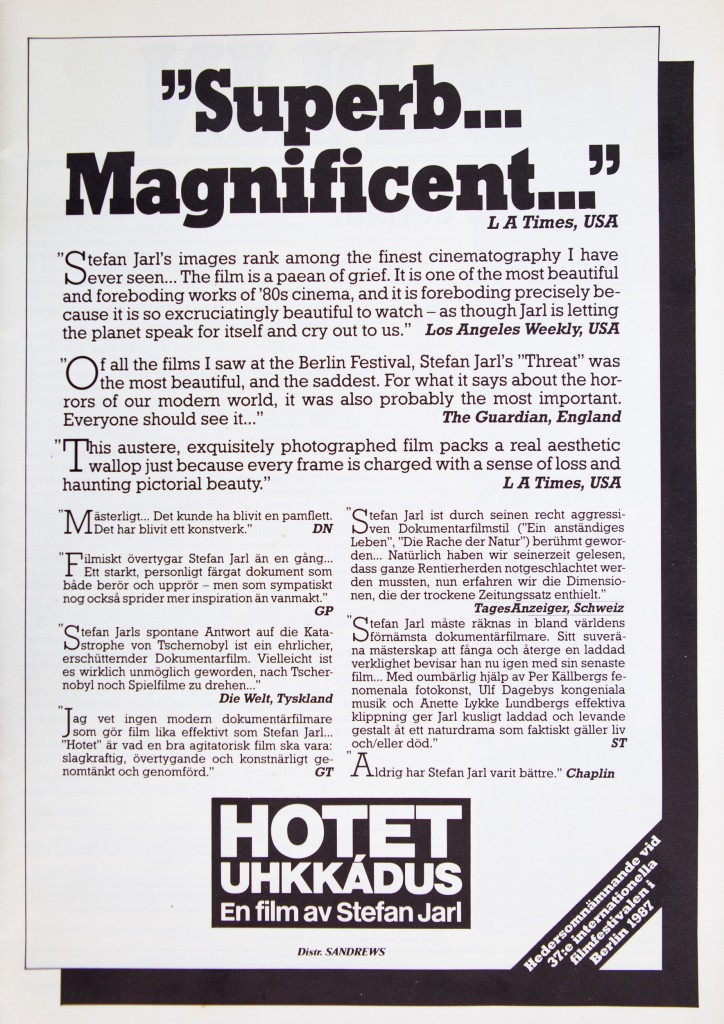 The Threath, article by Mats Nilsson

In May 1986, Stefan Jarl and his cameraman Per Källberg travelled to the Sami village of Talma, in Lappland in the north of Sweden.

Their purpose was to reconnoitre, leam more about the Sami and their way of life, and film the first shots for their feature film Good People (Goda människor). Everything had been prepared for Jarl’s first feature film. A script was ready and a production guarantee had been arranged.

An accident at a Russian nuclear reactor interfered with all this.

It had actually taken place a few weeks earlier, on April 26th, but it was during these days in May that the Sami were forced to realize that even their lands were contaminated with caesium from Chemobyl.

Stefan Jarl and Per Källberg went home after a week or so and Jarl found himself in the midst of an unprecedented moral dilemma. He had finally got together both script and finance for a feature film. But could he now make a feature film with Sami in the main roles, while at the same time these people had been the victims of a catastrophe like this in reallife? The film team travelled up to Lappland again. They began to film, but under protest.

Jarl realized that he would be forced to make another film, a documentary, but he didn´t want to. Up there on the bare mountains above the tree line, Jarl caught himself acting like a moral fraud. He found himself thinking along the lines of ”I’ll incorporate the best shots in the feature film, the others can go in the documentary” .

By gradual stages he abandoned his plans for a feature film and became more and more possessed by the thought of being the Sami’ s ”messenger”. In the shadow of Chemobyl he grew uncomfortably aware that this was probably the last time it would be possible to film Samis following their traditional way of life. His fury and rage that an indigenous people had been forced to take the ultimate consequences of Society’ s need for welfare, clearly spurred Jarl on to greatness. For me, The Threat is one of Jarl’s most powerful and beautiful films.

During the preparatory work for the planned feature film, he had established a good relationship with Lars Jon Allas, the ”headman” of the Sami village, his wife Lillemor Baer and several of their friends. Jarl decided that within the framework of interviews with Lars Jon and Lillemor, he would allow the actual process itself-before, during and after to become visible. In the end one would be able to ”feel” the fallout from Chernobyl. This does indeed happen in eamest during one of the most powerful scenes that Jarl has ever been able to achieve. When Lillemor Baer (at the end of the film) gradually gets in touch with her memories; the years of famine, the grinding toil together, fishing trips with her mother and her sisters; she finally breaks down in tears in front of the camera. It is an incredibly powerful moment. It took Jarl eight months to reach Lillemor’ s innermost sorrow. The scene is naturally a triumph for Jarl’s concept of direction the trust between those behind the camera and those in front of it.

Basically, Jarl does not allow Lars Jon and Lillemor to be merely Sami who sit there and talk, the idea was more to let them stand out as soulful beings, as symbols for those Sami who throughout history have been subject to outrages of various kinds: the destruction of the forests, the building of roads, the damming of rivers, tourism and so forth. They represent something which is whole, something unprotected, something which mankind needs and without which men are not human. Something which harks back to Adam and Eve in Paradise.

Neither does the title The Threat refer primarily to the fact that the Sami’s pastures and water are poisoned. It is more the violation of their attitude to life, of Sami as representatives for people who have chosen to live in harmony with nature, which is the great threat in the long term (Uhkkádus is Sami and really means ”encroachment” rather than ”threat”). It is the threat to our entire conception of what is untouched and harmonious, the equilibrium which we associate with the wilderness.

As the initial credits roll, as well as Dageby’s sacred, sorrowful, music, we hear a cacophony of sounds, a collage of everything which comes later in the film, a synthesis of the entire soundtrack, like a radio theatre. The screen is black, the idea being that during these two minutes all other impressions should be stripped away fromus. These associations draw us into a completely different world which we are about to visit.

Per Källqerg’s photography is remarkably powerful in The Threat. His powers of observation are greater than ever and he achieves new heights as a documentary film cameraman.

The powerful expressiveness of his images inspired Ulf Dageby to produce his most compelling film music for The Threat. Indeed, it was so strong that initially it overpowered the visual effect of the long final sequence. Jarl was sure that this was the right music, it was just that it was too powerful.

The final solution of allowing the music almost to drown Lillemor Baer, was arrived at after going for four days and nights without sleep, just a few days before the film was due to be shown at the International Film Festival in Berlin in 1987.

Stefan Jarl´s ”Threat” is a swedish movie made in 1987 and never released in the United States. “Threat” has the sort of subject – the decimation of the Lapplander reindeer herds after the Chernobyl nuclear disaster and the devastating effect of this environmental poissoning on traditional Lapp culture – that sounds as if it might make a good one-liner on the David Letterman show – or perhaps in a George Bush presedential campaign. Who, after all, really cares about the Lapplanders, or their reindeer, or their way of life, or anything else happening an ocean and a continent away, in strange climes and other languages?
It´s the genius of Stefan Jarl – who may be the greatest “unknown” documentary filmmaker currently at work (unknown, at least, in the U.S.) – that he makes us see, feel and intensely experience subjects so seemingly foreign and esoteric. “Threat” is an ecological documentary, but that is only it´s first level. It´s also a tragic ballad, a portrait of a people forced to stare into the abyss, and a fresco of natural wonders and staggering sights that perhaps are being lost to all of us. One sequence, where we watch the dead reindeer being ferried off on helicopters like broken dolls lifted mechanically up into a somber sky, is as beautiful and heartbreaking as any recent film has given us. Like many great documentarians – like Robert Flaherty, like Humphrey Jennings, and like Jarl´s own countryman and inspiration, Arne Sucksdorff – Jarl is a lyricist and a storyteller as much as a recorder of facts and the visible world. And his major theme – in “Threat” and his other films – is the tragedy of modern life, the destruction of natural impulse and beauty, of tradition, of simplicity. In the vast an stunning landscapes of ”Threat” he shows us a shadow and a warning: This beaty may die. This world may vanish. These animals, these men and women, these children, may disapear.

”Hotet” impressed me enormously l’d read about the nuclear devastation of Lapland in the newspapers and yet it remained only facts and figures, whereas your film showed me how another blow had been struck to humanity. I particularly admired the film’s dramaturgical construction, first giving one the sensuous pleasure of feeling close to the lives of the Laplanders, followed by images of death which wiped this feeling out. The contemplative statements gave the pictures a framework of credibility far and beyond simply personalizing the issue.