This film is Stefan Jarl’s most uncompromising contribution to environmental issues. It depicts mankind’s self-assumed role as ground-skeeper. It’s about what man is doing with nature, and what nature is doing with us. Nature’s revenge shows no mercy. Nature’s Revenge is also a very personal film to Jarl as he intercuts short autobiographical sequences of himself at the age of five.

A new kind of film has been born that crosses the divisions between imagination and documentary. .. One of the century’s most essentiai and artistically consummate films. “
/Svenska Dagbladet 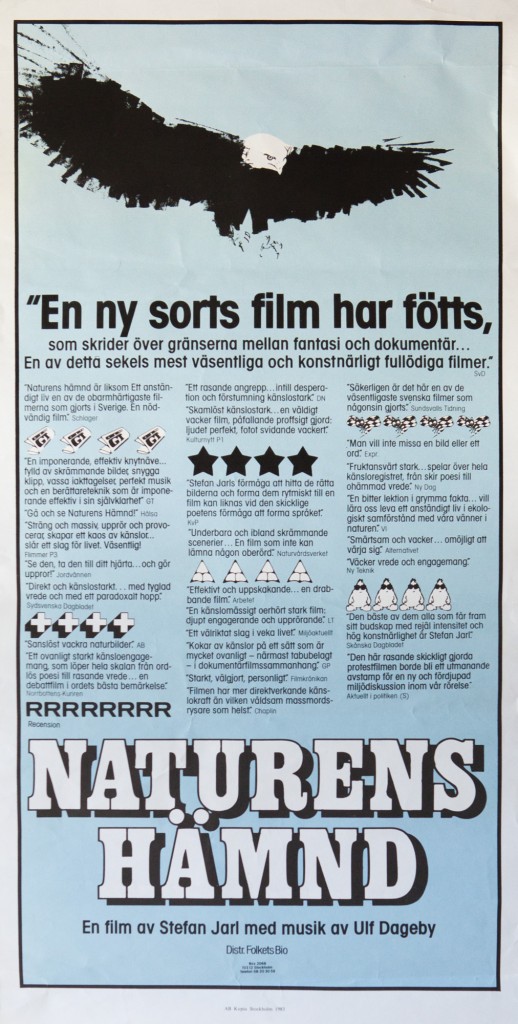 The making of Nature’s Revenge became The Great Liberation. The proceeds from A Respectable Life gave Stefan Jarl the possibility of working in the way that he and Jan Lindqvist had so dearly wished to do with Transform Sweden-travelling around Sweden and conducting research into contemporary life, with the help of a film camera. This time there was no producer to put a stop to it. The scientific documentary film was given free rein.

Jarl had a clear idea of what sort of film he wanted to make. Re wanted to depict mankind’s catastrophic self-assumed role as the gardener of nature. Re wanted to show what mankind does to nature’s and nature’s implacable response. He had money, he had the freedom and he knew what he wanted his film to say. The only question that remained was: how was he going to do it?

From an original script (which he had already discarded), ca1led The Poisoning (Förgiftningen), Jarl had kept a small fragment about the Kenyan partisans who were known as the Mau-Mau. But at that stage he did not know that this would become one of the three themes in Nature’s Revenge.

Money and film stock were being used up and there was nothing to show for it. Jarl and Källberg tried for months to capture on film the harmful effects of lead and cadmium. But it didn’t work. It wasn’t something which was possible to demonstrate, despite the collaboration they received from both researchers and scientists. The exhilaration of freedom began to be clouded by frustration.

It was then that Jarl, at a symposium on the environment, met a farmer from Jämtland named Nisse Nilsson. He was a man who had made certain connections and was prepared to fight for his opinions. Here was an ”antiresearcher”, an honest amateur who had studied a little chemistry and that was all. Nisse Nilsson had expert knowledge on a subject which interested Jarl: the infestation of grain crops by moulds (a direct result of using nitrogenous fertilizers as top dressing). Moreover, in Nisse Nilsson there was someone who, like Kenta and Stoffe, represented the people.

Shortly after that, Jarl came in contact with the parents of a two-year-old child in Gothenburg who was ill with cancer, and the structure of the film suddenly began to take shape in his mind. Jarl knew that certain researchers contended that up to 90 % of all cancers could be due to environmental factors. He now rea1ized that he should make a film in which he put together three stories which were different dimensions of the same thing, like a prism whose three sides were three aspects of the common problem: Mankind’ s destruction of the environment.

Nisse Nilsson represented someone who is a custodian of nature, who is a defender of its purity, but who at the same time is a partisan: a sort of persistent guerrilla fighter in the service of nature. On the philosophical level he became a parallel to the role of the Mau-Mau. Peter, the two-year-old boy suffering from cancer became the third level.

Most of the members of ”The Gang of Four” consider Nature’s Revenge to be their favourite film. This is not at all remarkable. What they had discovered and gained from their hard work on A Respectable Life (Ett anständigt liv) could now be refined and allowed to flower. This time the line of reasoning was associative from the very beginning, from the moment work started on the sound and music. This time, Ulf Dageby and Per Carleson could experiment with their recently acquired knowledge. The editor, Annette Lykke Lundberg, had had a hard time when she joined the team in the middle of the editing work on A Respectable Life. This time she was able to be completely in charge of the entire process. In the same manner as A Respectable Life, the structure of Nature’s Revenge, with its three distinct levies, came to be entirely based upon the principle of montage.

And it is probably no accident that Jarl and cameraman Per Källberg, during the shooting of Nature’s Revenge developed what came to be called ”The Picasso Principle”: a genuinely unique way of considering images. During the fruitless initial months, they decided to record at least ONE image every day, whether or not it had anything to do with the original concept. This was a logical extension of Jarl’s argument that an image can express something completely different when it finally ends up in the cutting room.

If new and fruitful ground was broken with A Respectable Life, then one can say that with Nature’s Revenge, the soil began to flourish and many fine plants began to grow. Jarl’s goal of being able to express himself fully had suddenly come much closer.

The short autobiographical sequence, filmed in black and white, shows the director himself at the age of five, running through a paradisiacal landscape. It is an intimation that Nature’s Revenge is Stefan Jarl’s most personal film to date.
/Mats Nilsson